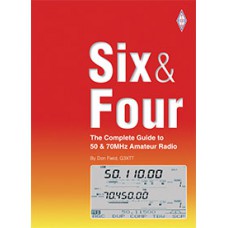 The Complete Guide to 50 and 70 MHz Amateur Radio

Six Metres (50MHz) - the 'Magic Band' - has always been 'different'. It sometimes behaves as an HF band, with world-wide propagation, but at other times acts more like a VHF band, enjoying the benefits of Sporadic E, meteor scatter and other occasional propagation modes. Because it has so many facets, 6m is both a challenge and an enigma and it draws amateurs from both the VHF and HF worlds. Six & Four is the complete guide to this fascinating band and the similar Four Metre (70 MHz) band.

Six & Four is based on the hugely popular 6 Metre Handbook, which is credited by some with doing much to popularise the 50MHz band. This book has moved on and is intended as a handbook for both the 6m and 4m bands. It includes a host of new material on the 4m band and the 6m material has been extensively rewritten to bring it fully up to date. There are details of the new equipment that has become available, especially by way of software-defined radios. There have also been some significant advances made in antenna design and EME ('moonbounce') activity has increased. There are new challenges, made possible by technological developments such as the WSJT and capabilities for remote operation have come on apace. And there are many ways to stay abreast of band openings and activity, through smart phones and other technologies. Six & Four covers all this and a lot besides.

Six & Four is essential reading for all radio amateurs, especially those who want to try something new and different. There's something for everyone, from the beginner who has never been on 6 m or 4 m and wants a detailed guide, to those who might already have 200+ countries confirmed on 6m! With new countries gaining temporary or permanent access on a regular basis, both bands are a lot of fun, as this book shows.