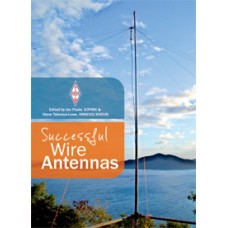 If you are interested in wire antennas Successful Wire Antennas is an absolute must have. Packed with the very latest wire antenna designs and developments from around the world, it covers a vast array of wire antenna designs including dipoles, doublets, verticals, loops and end-fed wires, as well as subjects such as impedance matching, ATUs, baluns, feeders, antenna masts and rigging and there is even an introductory chapter covering the antenna basics.

Written in an accessible style Successful Wire Antennas is part of the hugely popular family of Practical Wire Antennas books published by the RSGB. Successful Wire Antennas has much more content than its predecessors and many subjects get covered for the first time or in much greater detail than before. The chapter on vertical antennas runs to 49 pages alone, covering a huge array of vertical antennas, from the standard quarter-wave vertical through extended quarter-wave verticals and their matching, shortened verticals, vertical dipoles, folded verticals, quarter-wave slopers, 5/8-wave verticals, the ever-popular inverted-L, the 'T' vertical for 160m, end-fed half-wave verticals and vertical Zepps, J-poles, wire verticals for DXpeditions, a vertical Moxon wire beam, a wire vertical Yagi design, the use of fishing poles as supports for efficient vertical wire antennas, kite-supported verticals and the use of radials. There is much more besides and the old favourites have not been forgotten, as we go back to the original words used by Louis Varney, G5RV, to describe his eponymous antenna - as well as providing a 21st century analysis of it. The use of antenna modelling programs such as EZNEC which make it possible to predict the gain, azimuth and elevation patterns, feed impedance and SWR of an antenna design, as well as the effects of different types of earth on the antenna are also covered here. Successful Wire Antennas even includes many examples of the results of computer modelling of the antenna designs featured.

Successful Wire Antennas is of inestimable value to radio amateurs world-wide, whatever their level of experience may be. Free from any difficult mathematics, this book is a lavishly illustrated guide to building wire antenna systems that will be successful for you!