Birth of British Radar, The - The Memoirs of Arnold 'Skip' Wilkins 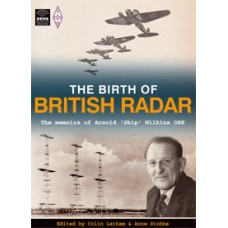 Arnold "Skip" Wilkins is one of the unsung heroes of the British effort to develop radar. The Birth of British Radar book combines the memoirs of Skip with an authoritative overview of the historical importance of his work.

At the core of The Birth of British Radar are Skip's memoirs of his involvement in the British radar (or, as it was then known, radio direction finding, RDF) programme from its very inception in 1935. Working under the direction of Robert Watson-Watt, it was he who proposed using radio waves, bounced back from an enemy aircraft, to detect its position. Initially working entirely alone, he constructed prototype equipment which he used in the famous Daventry experiment conducted in a field near Weeden, Northants, on 26 February 1935. The success of this led to the establishment of the R&D group at Bawdsey Manor with its team of talented scientists, engineers and technicians. From there he describes the engineering and political developments which occurred to change faint traces into a fully working system which played such a crucial role in defending Britain in the Second World War.

This second edition of The Birth of British Radar has been greatly expanded from the original memoirs with a large array of additional material. Each chapter of the memoirs is set in a historical context with an explanatory note. There is a host of extra material including an interview with Skip, details of how radar grew, post war commemorations and much more. The Birth of British Radar contains mono and colour photos along with details of Skip's post war experiences. The story of this publicity-shy individual who never sought public recognition for his achievement, is fascinating. This book describes the struggles and triumphs from the earliest days of radar, in perhaps one of the most important periods in British electronics development, and is highly recommended.