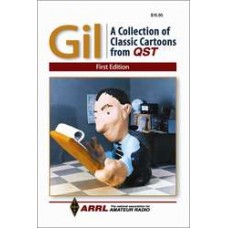 First Edition
This publication is more than a book of illustrations. It is a tribute to a legend, a man who created more than 1500 pieces of art for QST. The work of Philip "Gil" Gildersleeve, W1CJD, became a tradition. In tribute to this talented, creative and devoted artist and ham, the ARRL presents in this book a reprint of a portion of the best of his work.

About the Artist: Philip "Gil" Gildersleeve, W1CJD, contributed over 1500 cartoons and drawings to QST and the ARRL for almost 40 years. Gil was an avid radio amateur, devoted family man and exceptionally active in the community. For several years he worked as a radio operator aboard merchant ships and later on was News Editor of the Middletown (CT) Press. Although Gil became a silent key in 1966 his characters live on. Still today, his conceptions remain alive in the minds of both old-timers and newcomers to Amateur Radio.

"This first edition collection of Gil's cartoons was introduced in 1986."