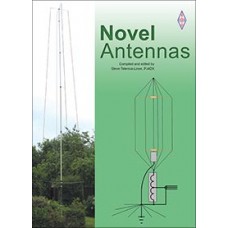 Radio Amateurs to one extent or another all experiment with antennas to get the best performance they can. But few have ever considered anything beyond the basic antenna designs - this book tries to set that right with a myriad of 'novel' antenna designs from around the world.

What is a 'novel' antenna anyway? This book does not include designs for standard Yagis, quads, quarter-wave verticals, horizontal loops, delta loops, magnetic loops, off-centre-fed dipoles or any of the more standard antenna designs that are found elsewhere. Although you won't find a standard dipole in this book, you will find the choke dipole; magnetic loops tuned by a variable inductance or a novel home-made capacitor rather than the usual vacuum variable; the 'Super Moxon', which adds a pair of directors to the standard Moxon Rectangle design; an orthoganally steered receive antenna that provides incredible levels of rejection of interfering signals; the home-made 'Wonder Whip' for QRP portable operation; a mobile antenna that can double as a car roof rack and, yes, the original Spiderbeam construction project described by its designer. Probably the most novel antenna in Novel Antennas is the 'PICaYAGI' by Peter Rhodes, G3XJP. This is a major constructional project in which the physical length of the elements are automatically adjusted to provide not just monoband but mono-frequency performance. Originally published in the Radio Society of Great Britain's journal RadCom this is the first time it has appeared in print, in full.

Novel Antennas ensures novel commercially made antennas are not excluded either, and independent reviews can be found of the unusual-looking Bilal Isotron antennas; the OptiBeam OBW10-5, which combines a five-element driver cell with both Moxon and Yagi-type elements in a novel hybrid design; InnovAntennas' new Opposing Phase Driven Element System ('OP-DES') and Loop Fed Array (LFA) designs, and several others.

With material included from no less than 57 different authors it shows the ingenuity of radio amateurs around the world knows no bounds. With designs from the UK, USA, Canada, France, Germany, Italy, Sweden and even El Salvador there will be something of interest to all antenna experimenters.