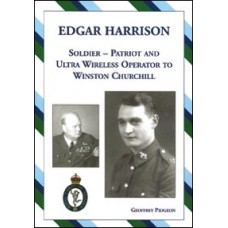 Edgar Harrison had the most extraordinary adventures in World War II. This book details the life of the man from his earliest years through a career in the Royal Corps of Signals an abrupt move into MI6. The story of his numerous missions on all fronts and his time as an Ultra operator for Winston Churchill, is fascinating.

Edgar joined the Army as a 14 year old apprentice and was soon heading on a posting to China for five years. Posted back to Britain in 1938 with war looming Edgar signed on for further military service. In January 1940 he was moved out of the blue into MI6 and the British intelligence HQ at Waddon Hall. By April he was in Norway at the time the Germans invaded, from where he had to beat a hasty retreat. He was then in Brussels during the Blitzkrieg before escaping back to England via Dunkirk. Posted to Greece he was again on the retreat when the Nazis launched their overwhelming attack, he however, refused to surrender with other Allied troops. Instead, he made his escape via Kalamata in a rowing boat before being rescued by a British warship. He landed in Crete and was soon retreating again and was later evacuated to Cairo where he spent time recuperating from the wounds. Edgar was then parachuted into Yugoslavia with wireless gear for General Mihailovic and he became involved in close-quarter fighting between the various factions. Following a submarine withdrawal he was then sent to the Ukraine, for his sixth retreat of the war whilst ostensibly training Russian tank crews in the use of British wireless equipment. After returning to Cairo and Rommel's successful drive into Egypt, Edgar was ordered to set up the agents' wireless station for the SAS and the Long Range Desert Group deep in the Libyan Desert down at Kufra Oasis. From there he was posted to Algiers, becoming involved in the invasion of Sicily and setting up stations in Italy. Eventually Edgar returned Whaddon Hall, five miles west of Bletchley Park, before going to France and Germany. During this time he was also assigned to Winston Churchill as the MI6 wireless operator at meetings with Allied leaders. Passing the leader the decoded German Engima signals know as Ultra. After the war Edgar became the Principal Signals Officer of the Foreign Office.

This biography has been written by an acknowledged expert on Britain's clandestine activities Geoffrey Pidgeon. This book provides a glimpse of one of the great WWII stories and is recommended to everyone interested in MI6 the work carried out by its signals operators.